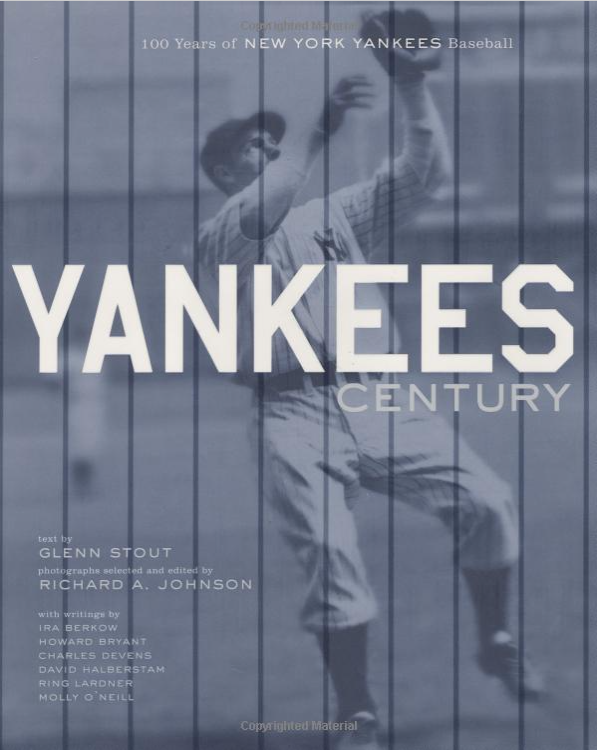 It says here that 14 percent of Americans root for the Yankees and the other 86 percent root for their demise. No fence-sitting; you’re in or you’re out with the Yanks.

If you’re in the other 86 percent, you ought to be reading it, too. First, because there’s something devilishly satisfying in reading about the early days, when the team was nearly shut out of Manhattan, playing on a sloppy, cobbled-together field with a swamp in right. Second, because as you turn the pages you come to realize that from DiMaggio to Mantle, from Bucky Dent and Reggie to Paul O’Neill and El Duque, these guys and the things they’ve done (sometimes to you, sometimes in spite of you) are part of your history, part of how you remember and imagine your life. And third, because it’s insanely thorough, full of details you’ve forgotten or never knew, and very good looking.

Stout started this series with “Red Sox Century” in 2000. “Dodgers Century” is in the works. These are rich, dazzling books, standard-setters, fully-realized, complicated portraits of the ways a team and a game weave in and out of politics, history and popular culture.

O’Neill’s sister contributes an essay to this volume that sums up the series’ appeal much better than I can: “In our family we tell stories, we don’t really talk. We let baseball articulate the hopes and fears that we’d never consider confiding in each other.”

It is fitting that Major League Baseball’s recent exhibition of greed and disregard for the fan should occur during the presidency of a former baseball-club owner, a man who, with his cohorts, extracted (to put it euphemistically) $135 million toward building a stadium from the people of Texas and ran a land scam that Jay Gould would have envied. In the end, Bush’s piddling, though nonetheless tainted, $600,000 investment brought him $15 million when the team was sold as private property a mere nine years later. The daily reminder of that unedifying episode in the ubiquitous shape of George W. and all the rest of it – the rapacity of owners under the friendly eye of a club-owning commissioner, the demolition of time-honored player records by hormone-marinated monsters, the continuing inequity and anomaly of interleague play, the bathos of the Red Sox’ trajectory this season, the whole spirit-numbing business – it’s almost more than I can bear.

Thank God there are books.

Some people might say that the New York Yankees are the root of all evil and might shrink at the idea of reading a history of that juggernaut. Such people should gather their strength, emotionally and physically, and take up ‘’Yankees Century: 100 Years of New York Yankees Baseball’’ by Glenn Stout (Houghton Mifflin, $35). In addition to the historical narrative, the 478- page book includes essays by a number of Yankee cognoscenti, among them Molly O’Neill, David Halberstam, and Howard Bryant, author of a book considered below. It also has over 250 photographs scrounged up from all over the place by Richard A. Johnson, curator of the Sports Museum of New England. The photographs, all eloquent, and some really awe inspiring, are alone worth the price of the book – which is, please notice, $9 less than one grandstand ticket this season at Fenway Park, and only $3 more than the worst vantage point in the house, a right-field ‘’box’’ seat.

Stout is, among other things, the author of ‘’Red Sox Century’’ (Houghton Mifflin, $40), published two years ago and the best baseball-club history I have ever read. The present volume – despite its painful subject matter – comes in a close second. As with the earlier history, this one’s greatness lies in Stout’s conscientious investigation of what really happened in its complexity and ramification; his meticulous setting straight of the story; and – oh, miracle and joy – his ability to do so in clear, engaging prose.

The notorious Babe Ruth deal, which has given rise to such a quantity of easy talk, unwarranted bitterness, and superstition (and which epoch-making event Stout turned on its head in the earlier book), gets a further shaking up here. It is not possible to summarize briefly the tangled circumstances that lay behind Ruth’s leaving Boston for New York. Suffice it to say that the central elements were the Bambino’s bad behavior and Grand Pooh-Bah Ban Johnson’s astounding lack of integrity, which, in turn, brought him a deserved comeuppance. One point, however, is simple and clear: Babe Ruth – Gargantua of ego and appetite – just did not, could not, fit into dinky, dowdy Boston, while, on the other hand, ‘’Ruth was New York incarnate – uncouth and raw, flamboyant and flashy, oversized, out of scale, and absolutely unstoppable. He towered over baseball like the Manhattan skyline.’’

Certain readers who are only human tend to gravitate toward the chapters in which the destiny of the Yankees intersects with what we might call the fate of the Red Sox. Stout weaves each encounter, so touchingly more significant to Boston than to New York, into the history of the game and of the cities themselves. He also perfectly captures the sense of exalted horror that we feel when we recall, say, 1978. I, personally, thrilled to the ghoulish brio with which he summed up an earlier calamitous encounter, a Bomber sweep in the merry month of May 1947: ‘’The Red Sox would never, ever be able to drive a stake through the heart of New York. For just as Boston would bend over New York’s prostrate body to check for breath, New York would rise and seize the Red Sox by the throat.’’

The Yankees have produced from their roster and helm more names that approach common nouns than any other sports team in history: Stengel, DiMaggio, Gehrig, Mantle, Berra, Mr. October, and, for that matter, George Steinbrenner and Billy Martin, whose folie a deux is a continuing theme through many pages. Stout portrays the individual characters of these and countless other Yankees through the years, and in doing so conveys the defining character of Yankee teams of different eras as they formed and dissolved through good times and the often-unnoticed bad