THE SELLING OF THE BABE: The Deal that Changed Baseball and Created a Legend 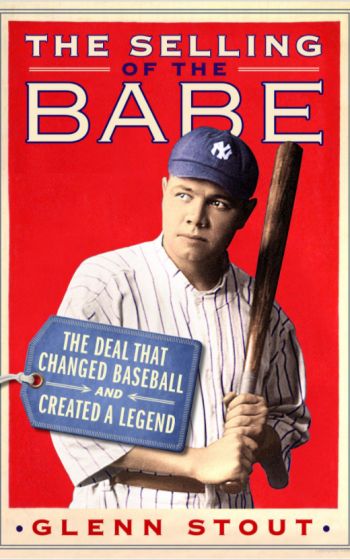 In bookstores and online everywhere – SUPPOORT YOUR LOCAL BOOKSELLLER!

Little talking The Selling of the Babe on the radio, with WFAN’s Ed Randall
https://player.fm/s…/the-tj-show/ed-randall-with-glenn-stout

“Glenn Stout rips the cover off this one, a no-doubt-about-it home run that is a triumph of research, writing and above all, clear thinking. A fascinating account that will leave any reader with a startling new perspective not just on Babe Ruth but on the game of baseball as we know it today.”  -Steve Kettman, author of Baseball Maverick and One Day at Fenway

“So thoroughly does Stout deconstruct the master narrative of Harry Frazee and “No, No, Nanette” that there’s virtually nothing left of it.  “Ruth was just a piece of…property,” he says, “a pawn in a series of decisions made partially for baseball reasons, partially for political reasons, and partially for financial reasons.  One thing can be said for certain—no single reason, no single fact, and no single condition led to the sale of Ruth.”  To his credit, Stout untangles and explains it all clearly and vividly.  His book is an outstanding exercise in historical thinking, depicting issues and events through the eyes of the people who lived them and eschewing judgments based on 20-20 hindsight.  Rather than just print the legend, he digs for evidence.  The story that emerges is far richer and more intriguing than the one we had before.  The Selling of the Babe is not merely sports history at its best, it is history at its best.” – Luther Spoehr, Senior Lecturer in the Education Department at Brown University, History News Network

“Roger Kahn, Donald Honig and David Halberstam are some of the names on the short list for of the greatest baseball authors. Someone who is making a serious run at that distinction is Glenn Stout, who is submitting another entry to his resume with The Selling of the Babe: The Deal that Changed Baseball and Created a Legend—an outstanding take on the Bambino’s famous sale from the Boston Red Sox to the New York Yankees. – Andrew Martin, MLBReports.com

“Stout uses his considerable skills as a writer and historian to show how this event helped bring about baseball’s modern era. His portrayal of that pivotal moment is fully engaging, taking the reader back to that exciting time.” – Library Journal

“… the real facts are thoroughly laid out in “The Selling of the Babe” by Glenn Stout, a historian who has previously written “Red Sox Century” and “Yankee Century.” The deal did more than affect the long-range trajectories of the two teams involved, it may have saved baseball from the stain of the “Black Sox” scandal and provided it with the perfect slugging icon as the home-run-stingy Deadball Era was ending.” — Christian Science Monitor

“Just when we thought there was nothing new to know about Babe Ruth, we find that the biggest part of his story needed retelling….this time devoid of the myth and hype that has surrounded it for nearly a century — a story that provides a firm and fitting foundation for the legend… “The Selling of the Babe” instantly changes our view of accepted baseball history, and Stout does a terrific job telling the story.” — Chicago Tribune

“Separating myth from truth in the most infamous trade in baseball history. The myth goes as follows: in 1920, the New York Yankees fleeced a cash-strapped Boston Red Sox owner, Harry Frazee, and in so doing got the game’s greatest star, Babe Ruth. This lopsided trade resulted in the so-called Curse of the Bambino, which saw the Yankees become the most dominant team in all of professional sports while the Red Sox embarked on an 86-year championship drought that they only broke in 2004. The Yankees got the Sultan of Swat, and Frazee used his money to finance No, No, Nanette, the Broadway musical. In this crisp history, veteran baseball historian Stout (Fenway 1912: The Birth of a Ballpark, a Championship Season, and Fenway’s Remarkable First Year, 2011, etc.) shatters the myth, providing an important corrective to the legend while also offering a fascinating history of baseball during a period of transition from 1918 to 1920. Ruth was a dominant player, but he was also a petulant, lousy teammate, inordinately selfish, and a far cry from what he would become. Frazee was not at all broke; indeed, he was thriving as a Broadway producer and owner. The mortgage on Fenway was a savvy business decision, not an act of Frazee being fleeced. Underneath the surface percolated tensions between two groups of owners, with the Yankees and Red Sox as, of all things, allies. Ruth would unquestionably become a phenomenon, but Stout makes clear that only in retrospect was the trade quite so ridiculous as it now appears. The author tells a good, well-focused story and makes a compelling argument, but he occasionally lapses into cliché, and, as with any revisionist history, this one occasionally overstates its case—though it might be a case worth overstating. Baseball history is full of hoary legends. Stout deftly challenges one of the game’s biggest.”  – Kirkus Reviews

Although baseball fans might groan at the idea of another book on Babe Ruth, author Stout, who edits the Best American Sports Writing series, brings reporting chops and fresh insights into one of the more momentous transactions in sports history: the 1919 sale of Ruth from the Red Sox to the Yankees. Among Stout’s many salient points: Sox owner Harry Frazee was not so frivolous as to need to sell Ruth to finance the Broadway show No, No, Nanette but, instead, used the sale to purchase Fenway Park. And it was never certain that the mercurial Ruth, who’d hit relatively few home runs at Fenway (and relatively many at the Yankees’ Polo Grounds), would succeed in Boston and, if he did, whether the Red Sox, who struggled to draw crowds, could afford Ruth’s subsequent contracts. The Curse of the Bambino having lifted in the wake of Boston’s 2004 World Series triumph, even Red Sox fans should enjoy this entertaining, mythbusting account. -Booklist

“Roger Kahn, Donald Honig and David Halberstam are some of the names on the short list for of the greatest baseball authors. Someone who is making a serious run at that distinction is Glenn Stout, who is submitting another entry to his resume with The Selling of the Babe: The Deal that Changed Baseball and Created a Legend—an outstanding take on the Bambino’s famous sale from the Boston Red Sox to the New York Yankees… [that]  gets down to the nitty gritty when it comes to perhaps the most infamous (and often inaccurately remembered) transaction in baseball history.

Too many baseball books get caught up in the legend of the players and stories. Stout pulls no punches while he lays out the truth. In The Selling of the Babe, he sets the record straight on a number of topics, including how Babe Ruth was a selfish player who often looked out for himself and his bank account before his team; how former Red Sox owner Harry Frazee was actually a fairly competent front office man whose ownership was impacted more by tense league politics than his first love of the theatre; and how the sale of Ruth to the Yankees was initially not seen as that much of a one-sided deal…
So much has been written about baseball over the years that it can be difficult to find something that you feel you’re reading for the first time. While Stout tackles a subject that many people know, he is able to give it a fresh spin, which has resulted in a true home run.”  – Andrew Martin, The Baseball Historian Blogspot
Order Now from Amazon