The Dodgers : 120 Years of Dodgers Baseball 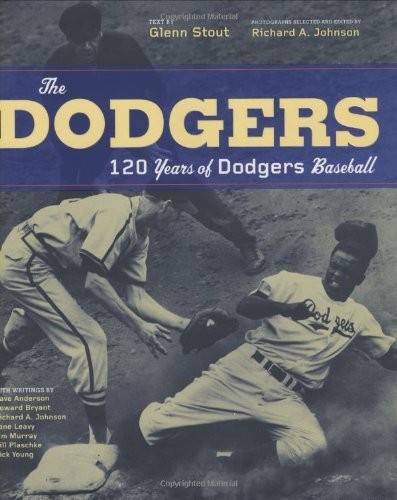 The Dodgers : 120 Years of Dodgers Baseball
by Glenn Stout, Richard A. Johnson

“Stout and Johnson, who teamed to write Red Sox Century and Yankees Century, now examine one of baseball’s oldest professional teams, the Dodgers, who have enjoyed a long and colorful history on both American coasts. Before the team signed Jackie Robinson, the first African-American player in the majors, the players were a collection of eccentrics, known more for their failures than their successes. But as the authors take recount the team’s history in both Brooklyn and Los Angeles, readers learn how the Dodgers became the “Boys of Summer,” the antidote to the predictable Yankees (who always seemed to win). They enjoyed a fanatically loyal fan base that was eternally optimistic. This book, which has a family album feel, employs Stout’s lively writing and Johnson’s exciting, rarely seen images to walk readers down a memory lane peopled with some of the most famous names in the game: Robinson, Koufax, Reese, Snider, Campanella and Drysdale. Essays by noted sportswriters (including Dave Anderson and Jane Leavy) appear intermittently throughout the book’s chronological order, giving readers insight into such memorable moments as Sandy Koufax’s four no-hitters and Kirk Gibson’s improbable home run against the Oakland Athletics in 1988. And number-crunchers will thrill at the numerous tables noting Dodger leaders and award winners.” B&w photos. Copyright © Reed Business Information, a division of Reed Elsevier Inc. All rights reserved. –From Publishers Weekly

“Carl Furillo. Pee Wee Reese. Duke Snider. For baseball fans of a certain age and persuasion, those names have the resonance of poetry. Their exploits and those of their predecessors and successors on the National League’s most storied franchise, from the bums of Brooklyn to the latest batch of interchangeable mercenaries in L.A., are recounted here season by season, game by game, even pitch by pitch. There are lengthy sections on Branch Rickey and Jackie Robinson breaking the color line in 1947, on the “boys of summer” winning an overdue world championship in 1955, on the treacherous Walter O’Malley moving the franchise in 1958, and on Sandy Koufax and Don Drysdale staging a ground-breaking holdout in 1966. Heartbreakers such as Bobby Thompson and Don Larson are of necessity mentioned, but the painful memories they evoke are more than balanced by accounts of Fernando Mania and Kirk Gibson’s impossibly dramatic home run in the first game of the 1988 World Series. This book will be relished by Dodger fans young and old, and very few others. Fortunately, there are lots of us.” — From Booklist – Dennis Dodge Copyright © American Library Association. All rights reserved.