The Cubs: The Complete Story of
Chicago Cubs Baseball 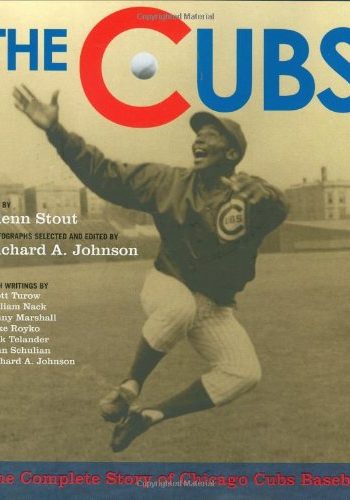 From the critically acclaimed authors of Red Sox Century and Yankees Century, the definitive narrative history of the Chicago Cubs: They were America’s most successful baseball club at the turn of the twentieth century, but at the turn of this century the Cubs have not won a World Series in nearly one hundred years. Yet, the Cubs have some of the most devoted fans in all of sport. Glenn Stout chronicles the long, rich, counterintuitive history of this team in all its depth, nuance, and color. Complementing the text are more than two hundred gorgeous black-and-white photographs selected by Richard Johnson as well as essays by noted Cubs chroniclers, including Scott Turow, William Nack, Rick Telander, Penny Marshall, Mike Royko, and more. A must-have for Cubs fans past and present, The Cubs is the definitive history of one of baseball’s most treasured franchises.

” ‘The Cubs’ by Glenn Stout and Richard Johnson is even better (if that’s possible) than their previous team histories of the Yankees, Red Sox and Dodgers.” – Bill Madden, New York Daily News

“Perhaps the greatest allegorical compliment that could be paid Glenn Stout and Richard Johnson’s book on the history of the Cubs is that the book was not authorized by the Cubs organization. Those who have struggled through the seemingly endless varieties of Cubs literary lore may appreciate that reality, seeing as reading some Cubs books is like reading about the parties on the Titanic. This one, however, is different and exceptional. Stout and Johnson do well to tell the tale of this franchise, and to discuss, dispel or fortify some myths or truths, and also invoke a certain treasured tenderness that a true Cubs fan should appreciate. Essays by the likes of Mike Royko, Rick Telander, and Penny Marshall tell that other Cubs tale: the kind you only seem to treasure because at one time you too were inside the bricks. It’s a massive volume, heavy as a brick but worth it’s curb weight.”-Chris Sprow, Chicago Sports Weekly

“The Cubs is an epochal study of Cubness: the Friendly Confines, daft and devoted fans who take their losses personally, myopic owners, spurious curses, classic collapses, and abiding stars who gave better and deserved more. It vividly portrays how, for a century, this historically losing franchise has made bonehead plays and stupid trades—and still amassed a huge national following. The Cubs will not always comfort Cub fans. But it will increase the tribe of Cub fans across the country. Let’s play two today!”– Scott Simon, Host, NPR’s Weekend Edition and author of Home and Away: Memoir of a Fan

“Richard Johnson and Glenn Stout long ago established their expertise at writing wonderful books about baseball teams that have been notorious for various reasons. In their latest endeavor, they’ve been joined by Mike Royko, John Schulian, and William Nack, among others. Talk about your all-star line-ups. The Cubs despite or perhaps because of the Cubs, is a winner.” – Bill Littlefield, Host, NPR’s Only a Game

“Once again, Glenn Stout and Dick Johnson have taken what is supposed to be a quaint genre — the coffee table book — and transformed it into important, indispensable history. Finally, we have a Cubs book that isn’t hagiography, but one deconstructs and enjoys the legend of the Cubs while simultaneously explaining the eternal mystery of how a big-city team could be so rich, so powerful, and so beloved with such little to show for it. An outstanding read that doesn’t let anyone off the hook.” –Howard Bryant, senior writer, ESPN and author of Juicing the Game and Shut Out

“I live in Boston, once a town of great baseball angst filled with downtrodden folk who mumbled and stumbled through a succession of 86 summers with the knowledge that sometime before the end of October the sky would fall directly on their heads. Then the crack literary firm of Stout and Johnson published a book entitled Red Sox Century, which confronted all demons, banished them forever and opened the way to a new zip-a-dee-doo-dah future. Now the lads take on the subject of The Cubs in the same through and entertaining fashion. The only question is what route the victory parade will take through the Windy City. – Leigh Montville, author of The Big Bam