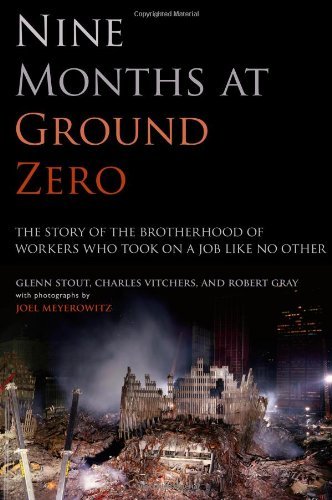 Hours after two airplanes hit the World Trade Center on the morning of September 11, 2001, Charlie Vitchers, a construction superintendent, and Bobby Gray, a crane operator, headed downtown. They knew their skills would be crucial amid the chaos and destruction after the towers fell.

What they could not imagine — and what they would soon discover — was the enormity of the task at Ground Zero. Four hundred million pounds of steel; 600,000 square feet of broken glass; and 2,700 vertical feet of building had been reduced to a pile of burning debris covering sixteen acres. Charlie, Bobby, and hundreds of other construction workers, many of whom had helped to build the Twin Towers, were the only ones qualified to safely handle the devastation.

Everyone working the site faced the looming danger of the collapse of the slurry wall protecting lower Manhattan from the waters of the Hudson River, the complexity of shifting tons of steel without losing additional lives, and the day-to-day challenge and emotional strain of recovering victims. Charlie Vitchers became the go-to guy for the hundreds of people and numerous agencies laboring to clean up Ground Zero. What he and Bobby Gray make dramatically evident is how the job of dismantling the remaining ruins and restoring order to the site was far more complex and dangerous than constructing the tallest buildings in the world.

With stunning full-color photographs donated by Joel Meyerowitz — a celebrated and award-winning artist and the only non-newsroom photographer allowed access to the site — and first-person oral accounts of the tragedy from the morning of the attack to the Last Column ceremony, Nine Months at Ground Zero is a harrowing but ultimately redemptive story of forthright and heroic service.

“Journalist Stout (series editor, The Best American Sports Writing) co-wrote this moving account of the nine-month effort to recover bodies at Ground Zero and safely handle the wreckage of the Twin Towers with two veterans of the construction industry. Charlie Vitchers (general superintendent, Bovis Lend-Lease) and Bobby Gray (Int. Union of Operating Engineers) became key leaders in this massive undertaking. For his part, Vitchers coordinated the work of the New York City public service departments and various private companies, resolving problems among the groups and dealing with pressures to speed up the recovery efforts. It was construction workers, many who had been involved in building the World Trade Center, who handled much of the recovery effort. This book’s strength is in showing the human cost of this process. Unlike firefighters, police officers, and other emergency-response personnel, construction workers are not trained or conditioned to recover human remains, and that aspect of their work took a heavy toll. Included are interviews with ten other people (construction workers, firefighters, family members, etc.) involved in the grim recovery process. This touching book is recommended for all.” – Library Journal

“Although the attacks on the Twin Towers on 9/11 are etched into our consciousness, few of us understand the enormity of the task of the subsequent search and rescue and protracted debris removal. The shots of the site with the coming and going of trucks is the most any of us remember about the grueling cleanup project. As the men who originally built the towers, coauthors Charles Vitchers and Robert Gray were uniquely qualified to help. Unasked, they devoted nine months of their lives, not to mention the stress, sleep deprivation, and loss of family life that went along with it. The scale and complexity is nearly unfathomable: 400 million pounds of twisted steel; 600,000 square feet of thick shattered glass; and mountains of the trappings of office life, including chairs, desks, and other furnishings; all mixed with the scattered remains of almost 3,000 victims. Through this account of their heroic effort, beginning at the moment of first impact, we can begin to get a sense of ‘what the men and women went through who dealt with the tragedy firsthand.” –from Booklist

“Pick up the newspaper and it’s the same every day whether it’s politics, sports, or business: greed and corruption have become standard operating procedure. It’s hard to have faith, until you read Nine Months at Ground Zero. Are there any heroes left? The answer is a resounding yes in this beautiful and poignant and important book. God bless these men so willing to make the impossible possible.” – Buzz Bissinger, author of Three Nights in August

“This inspiring story brings us all to a concrete-and-steel intimacy with a structure, its place, and its people. To know Charlie Vitchers and Bobby Gray is to know New York down to its bones.” – Richard Ben Cramer, author of What It Takes: The Way to the White House